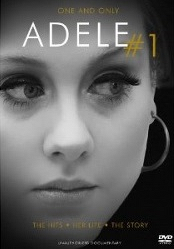 Adele: One and Only is an unauthorized documentary film about Adele which was released to DVD on December 6, 2011. The film is only two minutes long and quickly summarizes Adele's life. The film's title makes reference to Adele's song from her sophomore album, 21, "One and Only."

Retrieved from "https://adele.fandom.com/wiki/Adele:_One_and_Only?oldid=25653"
Community content is available under CC-BY-SA unless otherwise noted.