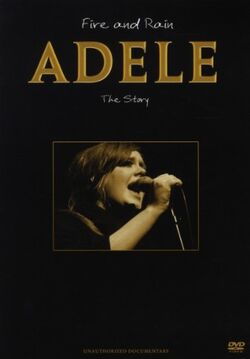 Adele ‒ Fire And Rain: The Story is an unauthorized documentary film about Adele. The film's title makes reference to her third single from 21, "Set Fire to the Rain."

Adele is a double Grammy Award winning singer-songwriter who caught the attention of the media after becoming the first recipient of the Critics Choice award at the Brit Awards in 2008. After picking up the honour, she went on to enjoy huge success with debut album 19 and since then has released her follow up 21, which also went to number one and stayed at the top of the charts for over 15 successive weeks, breaking Madonna's record of nine in 1990 with The Immaculate Collection. Fire and Rain tells the story of Adele plus interviews and more. A superb unauthorized documentary.