Adele One Night Only

Adele One Night Only is a television special by Adele. The program aired November 14, 2021 on CBS, and featured an interview with Oprah Winfrey.

The two-hour special featured Adele’s first televised interview about her her forth studio album, 30 — scheduled for release five days after the premiere of the special — as well as the inspiration for her new songs, her life since her divorce from Simon Konecki, her weight loss and her relationship with her son Angelo.[1] Much of the special was filmed during a private concert at Los Angeles’ Griffith Observatory on Sunday, October 24, during which Adele performed a combination of her biggest hits, fan favorite album tracks and several new songs.[2][3] The first official teaser for the special aired on October 31, 2021 on CBS and featured a clip of Adele’s first live performance of “Easy On Me.”[4]

Adele officially announced the special on her social media accounts on October 18, 2021.[5] It was directed by Adele’s longtime collaborator Paul Dugdale and produced by Fulwell 73 Productions and Onward Productions in association with Harpo Productions. Adele and her manager Jonathan Dickins both serve as executive producers on the project, alongside Raj Kapoor and Grammys producer Ben Winston.[3]

Upon its release, the special was made available to stream on Paramount+ both live and on demand.[1] It drew 10.33 million viewers and made for the most-watched television special since the 93rd Academy Awards in April 2021.[6]

In addition to ten songs comprising the special’s setlist[7], several additional songs were either rehearsed or performed and omitted from the special, including “One and Only,” “Water Under the Bridge” and “Love in the Dark.”[8][9] 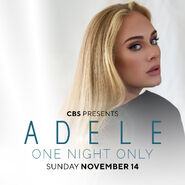 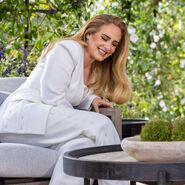 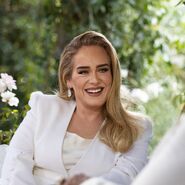