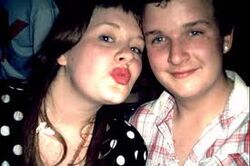 Allan Rose is an old friend of Adele's who helped to start her career by filming videos of her performing during her days at the BRIT School, where he also attended.[1][2]

The only known video he filmed of Adele was her performance of "Daydreamer" from her debut album, 19. The song was featured on her demo that she recorded prior to being discovered by XL Recordings.

Speaking about Adele, Allan has said, "She was bubbly, fun, and very outgoing. She was very popular [in school]."[3]