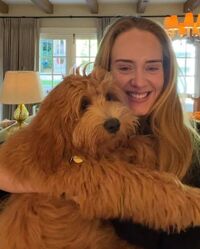 Bob is one of Adele’s two Goldendoodle puppies. He first appeared during Adele’s first Instagram Live on October 9, 2021, in which Adele introduced him as “Bobbity Bob.”[1] He has a brother (also owned by Adele) whose name is Freddie. Both dogs were mentioned in Adele’s December 2021 Rolling Stone profile[2] and during her interview with The Face.[3] A photograph of Adele with Freddie and Bob can be seen in the photo montage during Adele’s performance of “When We Were Young” on her television special, Adele One Night Only.[4]

Some fans have speculated that Bob may have been named after a musician — such as Bob Dylan or Bob Marley — similarly to Adele’s dachshund, Louie, who was named after jazz musician Louis Armstrong.[5]