Start a Wiki
Katy Perry: Part of Me (film)
left 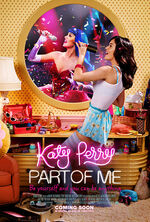 Katy Perry: Part of Me (advertised as Katy Perry: Part of Me 3D or just Part of Me) is a 2012 3D documentary concert film centering on singer Katy Perry. It was released in the United States, Canada, United Kingdom and Ireland on July 5, 2012. Adele makes a cameo in the film discussing Perry, alongside other artists (including Lady Gaga and Jessie J, both of whom Adele is affiliated with). Adele's cameo is approximately twelve seconds long and very briefly speaks of Katy Perry's success.

Retrieved from "https://adele.fandom.com/wiki/Katy_Perry:_Part_of_Me_(film)?oldid=26469"
Community content is available under CC-BY-SA unless otherwise noted.