Madame Tussauds is a wax museum in London with branches in a number of major cities. It was founded by wax

sculptor Marie Tussaud and was formerly known as "Madame Tussaud's," however, the apostrophe is no longer used. Madame Tussauds is a major tourist attraction in London, displaying waxworks of historical and royal figures, film stars, sports stars and infamous murderers.[1] Adele has two wax figures at the Madame Tussauds locations in London and Amsterdam.

In February 2013, Adele received the Academy Award for Best Original Song for her song "Skyfall," the theme for the James Bond film of the same name. Following the win, Madame Tussauds announced on their website that due to her global success, they planned to make a wax figure of Adele for their London location, although an identical one would be made for their Amsterdam location as well.[2] They revealed that the look of the wax figures would be inspired by Adele's outfit at the 54th Annual Grammy Awards. It was revealed that her wax figure would be an addition to their list of musician-inspired figures, which also included Beyoncé, Amy Winehouse, Michael Jackson, Rihanna, One Direction, Britney Spears, and Lady Gaga.

"Adele is the perfect addition to the music line up here in London," said Madame Tussauds London PR manager Nicole Fenner. "She's one of the world's hottest properties right now and one of our most requested personalities. In fact, we've seen a huge increase in requests for her figure since 'Skyfall' was released and the timing seems perfect to honour her after such phenomenal success with the song. She is one of the most influential British female artists and we know she is going to be a huge hit with our guests alongside our other pop greats. We're very excited to welcome her to Madame Tussauds London."[3]

Madame Tussauds' production coordinator and colourist, Alex Garnett, added, "Well, there's lots and lots of elements that we've got to get perfectly right. But I think in terms of us creating a wax figure, what you want to create essentially is a snapshot of that person. So we want to get over the emotion, the presence and the sparkle that she's got and so we really wanted to capture that."[4]

The main wax figure, which is currently on display in London's Madame Tussauds location, was previewed in May when pictures were posted online of sculptors working on the wax figure, specifically Adele's head.[5]

The main wax figure officially debuted at Madame Tussauds in London on July 3, 2013.[6] Adele, who was not there at the launch of the figure, had the privilege of seeing the figure before it was unveiled and was very impressed, saying that, "That's scary! It's amazing – I feel a bit emotional. They've even got my chin right."[7] The figure was praised by many for capturing Adele's beauty and for its stunning resemblance to her. In front of the figure is, appropriately enough, a microphone, intended to display Adele during her performance of "Rolling in the Deep" at the Grammys.

The figure was criticized by some who felt that the figure was thinner than Adele herself.[8][9] Many fans of Adele immediately took to Twitter to complain about how thin the figure was.[10] Some fans complained that it didn't represent Adele well at all, and were genuinely offended by it, with some even interpreting it as a fat jibe at Adele, despite its original intention being to praise her for the impact she has made on the music industry.[11] 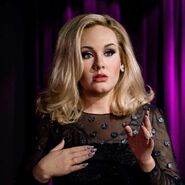 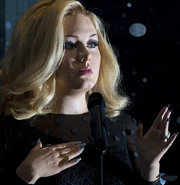 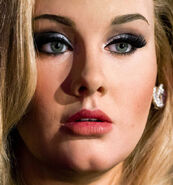