Many Shades of Black (song)

"Many Shades of Black" is a song by the band The Raconteurs. It appears as the eighth track on their second album, Consolers of the Lonely. It is also the second single from the album and was made available in 7" vinyl format. The cover art depicts Mary Todd Lincoln or Abraham Lincoln depending on the way the inner sleeve is turned. The track is also available as downloadable content for the music video game Rock Band 2. The release of the single contains a version of the song performed by British soul singer Adele. Adele has performed this song live several times, including during her tour, and it was included in the deluxe edition of her album 19. The Adele version was featured in the ending of 90210 episode, "Wild Alaskan Salmon" (episode 6, season 2). The song was also the first track on the 90210 soundtrack. The song peaked at number 37 on the U.S. Hot Modern Rock Tracks chart.

Adele's collaboration with The Raconteurs almost resulted in future work between Adele and the band's lead singer, Jack White, on Adele's sophomore album, 21, however, Adele stated they never got around to finishing collaborations they had planned in 2009 following the Grammy Awards. [1]

The single had two covers, depending on which way the inner sleeve turned. One features Abraham Lincoln (pictured above) and one features Mary Todd Lincoln, which is shown below: 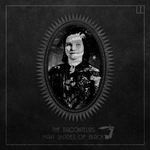