An NRJ Music Award (commonly abbreviated as an NMA) is an award presented by the French radio station NRJ to honor the best in the French and worldwide music industry. Adele has received three NRJ Awards from four nominations.

Adele opened the 2015 NRJ Music Awards with a performance of "Hello" on November 7, 2015.[1] The performance was, however, recorded on the previous day, on November 6. She performed the song in front of an audience of 300 people. On the trip, she brought with her a team consisting of her manager, her make-up artist, her assistant, her stylist, and her dog Louie.[2] She also received an honorary NRJ Music Award.[3]

On November 9, she released the performance on her Vevo account.

All photos taken by Alexandra Waespi. 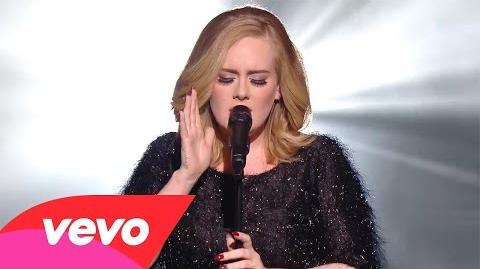 Adele performed “Easy On Me” during the 2021 NRJ Awards.