She has three dots tattooed on her left wrist. The tattoo is identical to one sported by The Civil Wars’ Joy Williams, who is a good friend of Adele’s.

On August 13, 2011, Adele had a tattoo done to honor her mother Penny, which has since become known as the “One Penny” tattoo. The tattoo was done at Lyle Tuttle Tattoo & Museum in San Francisco, California.[1] It appears on her left wrist, directly below the “three dots” tattoo.

Three of Adele’s tattoos honor her son Angelo. The first is the letter “A,” tattooed behind her right ear; she was first seen with this tattoo at the 55th Annual Grammy Awards in 2013. The second, the word “paradise,” appears on her left hand; she had this tattoo done at Bang Bang Tattoos in New York in June 2013. The tattoo is similar to one worn by singer Lana Del Rey, though Adele told Rolling Stone that she was unaware of Del Rey’s tattoo when she had it done. Adele also had Angelo’s name tattooed on her right hand; she was first seen with this tattoo when she appeared with her partner Simon at the Glastonbury Festival in 2015. In an interview with Matt Lauer for The Today Show, Adele confirmed that the “Angelo” and “paradise” tattoos refer to each other.[2] She also explained the significance of the tattoos to Rolling Stone, stating, “Angelo is my paradise.”[3]

The numbers 19 and 21 are tattooed on her left wrist, as a reference to her first two albums.

Five doves are tattooed on her right shoulder blade, though their significance is unknown. However, the number five, which Adele has said is her favorite number, is also tattooed on the inside of her right ring finger.[4]

Adele also has a small tattoo on the inside of her left ring finger. It is so small that it’s hard to tell what the tattoo represents.

In November 2021, Adele revealed that she has a little bird also on her left shoulder blade.

“One Penny” and three dots[] 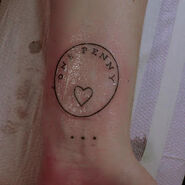 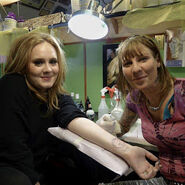 Adele getting her "One Penny" tattoo done at Lyle Tuttle Tattoo & Museum in August 2011. 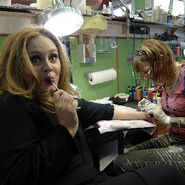 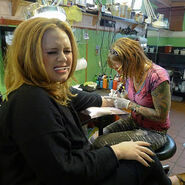 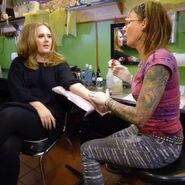 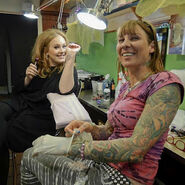 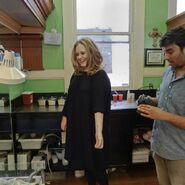 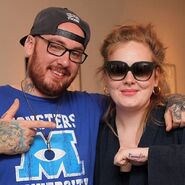 She showed off her "Paradise" tattoo on the front page of Rolling Stone in November 2015. 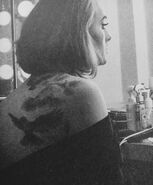