The Civil Wars were a critically acclaimed American musical duo composed of Joy Williams and John Paul White. Formed in 2008, The Civil Wars won four Grammy Awards prior to their 2014 breakup.

In 2011, The Civil Wars served as the opening act for Adele during the North American leg of her Adele Live tour, which promoted her second studio album, 21.

On the last night that The Civil Wars toured with Adele, she came out during their performance of Michael Jackson’s “Billie Jean” and gave them flowers. She added, as she began to choke up, “I just wanted to say I’ve never had so much fun on tour as I have with you two, and you really brought me back to life.”​​​​[1]

Adele had previously dedicated a blog post on her website to the duo, in which she gushed about how much she loved their music, stating:

The Civil Wars also later discussed what it was like touring with Adele:

At the 54th Annual Grammy Awards, the duo was interviewed on the red carpet and stated that artists like Adele and Taylor Swift had helped their music become exposed to many different audiences.[4]

Joy Williams of the band also shares a tattoo with Adele; they both have three horizontal dots tattooed on their wrist. 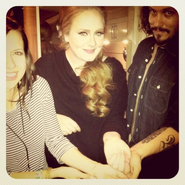 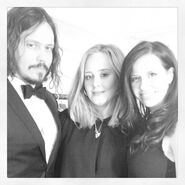