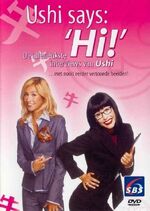 Ushi Says: Hi! is a 2009 comedy film starring Wendy van Dijk. Adele was featured in the film in a comical interview in which Wendy van Dijk, who is disguised as a Japanese reporter named Ushi Hirosaki, interviews her and other celebrities, often asking comical and provocative questions and embarrassing them.[1]

It was filmed towards the end of April 2009.

Retrieved from "https://adele.fandom.com/wiki/Ushi_Says:_Hi!?oldid=27967"
Community content is available under CC-BY-SA unless otherwise noted.