Adele has several wigs that she has worn on various occasions due to the fact that it takes so long for her to get ready. When giving Anderson Cooper a tour of her house, she took him into her bedroom and showed him some of her wigs strewn on the bed. Adele also told him that she jokingly gives them pet names, revealing two of them to be “June” (after June Carter) and “Jackie” (after Jackie Collins).[1]

Prior to the release of 25, Adele would frequently wear wigs during various television appearances and live shows. In Live at the Royal Albert Hall, she wears a wig.

According to her official forums, Adele wore wigs for much of the North American leg of her Adele Live tour.[2] 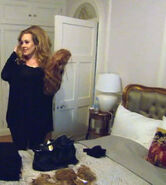 Adele wearing "Jackie" and showing Anderson Cooper a few of her several wigs.

Adele at the 2011 MTV Video Music Awards, wearing one of her wigs.

Adele being interviewed by Anderson Cooper. 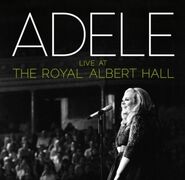 Adele on the cover of Live at the Royal Albert Hall, wearing one of her famous wigs.